Personifying vibrant energy, vitality and passion, Ned Bell is an established culinary leader with a proven track record of success. Bell brings his one-of-a-kind special sauce to the table to everything he does ensuring that his culinary operations become the buzz-worthy, must-visit, visit and re-visit destination. With dedication and a proven track record for quality, character, craftsmanship and record-setting results for both the top and bottom lines, as well as chart-topping amounts of media impressions.

Ned has cooked around the world with notable stops in Toronto, Calgary and Kelowna from 1997-2007. Career highlights including hosting seven seasons of Cook Like a Chef on Food Network Canada, opening his own Kelowna based-restaurant – Cabana Grille, receiving the Food Service & Hospitality magazine’s Pinnacle Award for Chef of the Year (2015) and leading a multi-chef sustainable seafood celebration at James Beard House (2017) Global Champion of Sustainability, Sea Web, 2017 – just to name a few. 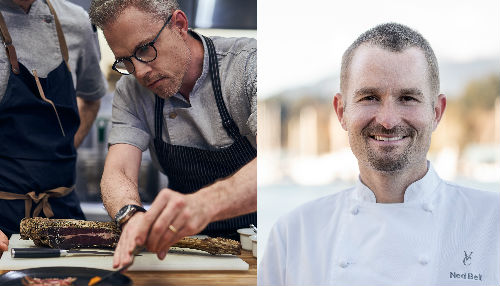 Allow these two chefs to take us on a culinary journey from coast to coast that few are fortunate enough to indulge in.